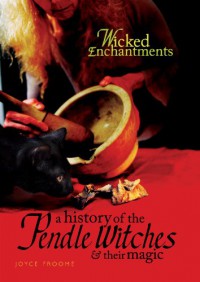 I bought this book on the recommendation of a trusted friend who's a fellow Pagan. While I don't normally read studies since I find them far too similar to school work, this one was slightly different. This one was about a topic I wanted to know about. This book is about the Witch Trials that took place in England in 1600's, more specifically the case of the Device family of Malking Tower in the Pendle Forest.
I will begin this review by saying that while, again, I'm not a fan of studies, this book has so many interesting things in it, that even with it being a history lesson, it was still intriguing. I particularly liked the remakes of the spells the Cunning Folk used in the 1600's. I found it fascinating to see how much spell casting has changed through centuries and yet still even though we cast differently today, they are still very similar to each other in so many ways.
The study itself is heart wrenching. Witch against Witch, accused against enemy, worst of all; young children forced to testify against their families; and forced to live with the knowledge that their statements helped get them killed. It didn't help that the Assizes were a madhouse and hardly anyone was able hear what they were accused of.
I also liked how snippets of the actual propaganda pamphlets were integrated into this book along with actual statements, and photographs of re-enacted spells. It gives the reader a better understanding of how things were done or made to seem.
I found a single error in this work on page 145, other than that the editing was flawless.
This book would be an asset to any witch that enjoys reading up on our histories even if they aren't from England, after all, we are all brothers and sisters in the craft.
I would also suggest this book to anyone curious to understand why we witches stand so united now and why we always remember the Burning Times.