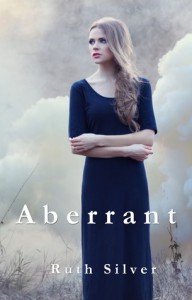 Aberrant starts out pretty much like every other Dystopian book I've read so far (which isn't very many). Like the others, some unknown virus wiped out most of the human race some however centuries ago. Everyone in Cabal, like in all Dystopian books, has whatever population remains divided into main groups. You have your citizens, who in live in cities walled off from the rest of the world and are controlled by the reigning government...And you have your rebels who live outside the sanctioned wall cities. As usual, the government and the rebels hate each other, and the citizens have it drilled it in their heads that nothing is outside the "safety" of their walled city. Also, the same with most Dystopian books (even a few select Dystopian listed as Sci-fi), love is no longer a factor in marriages. The government chooses your mate and you have to deal with it.
Now that I've listed the similarities, I'll tell you what makes Aberrant different from any Dystopian book I've ever read. Some of the rebel cities are just as forceful and corrupt as the government they are against...And natural conception is a thing of myths from before the Red Plague (this book's killer virus). Enter Olivia Parker, the girl everyone wants for one reason or another and her best friend Joshua Warren.
I really do have to give Olivia props. If I'd gone through half the crap she seems to find herself in almost every chapter, I'm almost sure I'd have either lost my sanity or killed myself.. Or someone else o.O Olivia, while having a small nervous breakdown here and there, pretty much remains a strong character never once wavering from the things she wants the most in life.
There is plenty of action and near heart stopping moments in this book. Aside from a slight easy to miss typos here and there it's a gripping read the reader will be unable to put down. I read it in three hours. I kept telling myself that I didn't have to rush. (As I'm writing this on my note pad I'm cursing my cable company for the week I'm going without net atm). Even though I no longer had the deadline looming over me, I still HAD to continue to turn the pages to see what happened next.
So while many will sit there and whine and complain about the similarities this book has to other Dystopian books (I haven't read enough of them to know if the reason they're all based like this one is what makes the genre), I urge the reader to look at the differences this story will bring. These differences make this book a must read for any lover of the genre.
I hope Ruth is working on a sequel to this book and if she is I look forward to reading it.
I give this book 4 of 5 paws