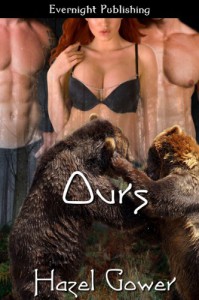 This book strays from Brian, Blake, and Suzie and focuses on Sandy who discovers she too is the mate of two bear shifters.. Jake and Zack. Sandy is every bit the spitfire who really doesn't want to be in the situation more so because of her family then any valid reason. And while this story strayed from the whole Bear family men mating human females the matron has an issue with (hopefully a future installment will return to that) it does have another serious undertoned element in it.
This story is a bit more  action laced then Thiers was.. And I still want to know what Adele is up to I trust that woman about as far as I can throw her. I did spot a couple of small errors, nothing that would turn the reader off, but as I've said before, those occure when a writer is in the heat of the moment so to speak.
I do hope the next installment goes a bit deeper into the whole Adele thing. and I wonder if it will be about Gwen or Sammy, only time will tell how Hazel will manage to torture her fans next.
I give this book 5 of 5 paws