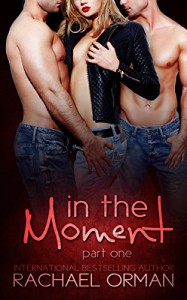 While I do like a bit of hot steamy sex in my stories, I like there to be more story than sex. Sometimes, though, I get asked to review the exact opposite. Such was the case with In the Moment. I do have to admit that this story is alright. Granted, there's sex pretty much on every page, but the characters are developed just enough to give the reader a feel for them, to let the reader know that these fictional characters aren't just generic creations. The banter between Ace and, well, anyone is enough to bring a smile and the occasional chuckle to the reader's lips, and Alicia is more confused about what she wants than I think she even knows. What little actual plotline there is in the first part of this series, was enough for me to eagerly turn the page. It's also enough to leave me in anticipation of part 2. Well done Ms. Orman, you've accomplished what so few others have concerning my enjoyment of this genre.