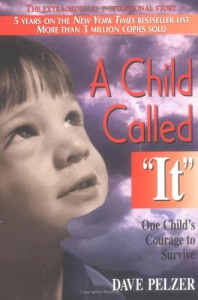 I'm kind of conflicted on this story. Aside from some telling me it's true, and others telling me it isn't, the manner in which the mother treats Dave is a bit off. Being a survivor of child abuse myself, I know all about the random beatings, the "games", and the starvation methods. While my mother didn't do any of them (except the beating part, child services was a common visitor at my house from 1st-5th grade), I at least knew why my mother hated me. Dave seems to never actually be told the reasons for his mother hatred toward ONLY him and not his other four or five brothers who seemed to never punished let alone beaten. Normally if a child's singled out from a group of siblings it's because that child reminds the parent either of the other parent or themselves, but there seemed to be absolutely no reason that she started to abuse Dave who at the time was the youngest. Normally in abuse cases, it's the oldest or middle child. Now by the end of the book, Dave is the middle child I think, but he was the youngest in the beginning.

Another inconstancy I found in this work was the father. The man was a firefighter and yet cowed and allowed his wife to not only beat and starve his son, but watched her pour ammonia down his throat? I don't know about the rest of you, but that doesn't sit right with me. Firefighters are not cowards, it's not in the job description, yet this man was portrayed as anything but a man. I don't know a single man in a job like that that would allow that behavior to go on.

Despite my feeling that this story is less than accurately told, it's still one that will tug at the heart strings. Any story where a child suffers like the one in this story is. And while it IS inconsistent in a lot of things, the message is still there. I believe this book should be mandatory reading for parents who have had their children taken by child services. I believe the greatest punishment they parents can ever receive is reading what their brands of torture do the child they could have easily given up for adoption rather than torture than torment or in some cases either kill.

For the messages this book hold and ONLY for those, I give this book 3 of 5 paws.