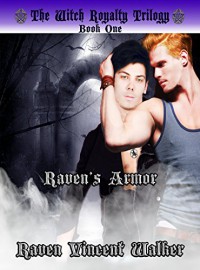 Raven's Armor follows the story of Raven Dark Child, an extraordinary young witch who was blessed by Hecate herself. Raven has a unique set of friends including a werewolf named Trent, a familiar named Hajime, and a vampire named Dominic. Sent away from the only home they'd known, Raven and Trent, along with Hajime, are ordered to handle a situation that's been brewing.

I really liked this story. The characters are all unique and easily defined by their own quirks. The only one I had any real issue with was Dominic, he's not very old-school Vampire in demeanor to be as old as he is, but he's still a lovable character once you get over how old he's supposed to be compared to how old he acts.

I loved how spells, chants, prayers, were used in this story. It had a real witch feel to it unlike a lot of other witch themed stories.

The love stories that develop in this book are heart-warming even if they do feel a bit rushed in certain instances.

I look forward to Raven Rising, book two in this series.